During an evaluation workshop on 22 November 2021 metrologists from the pilot laboratories DPM and KMA presented their approaches and results and discussed the challenges encountered and lessons learned.

This project started in November 2020 by a regional capacity development workshop on the requirements of ISO 17043:2010. Subsequently National Metrology Institutes (NMIs) from 4 WB6 countries were offered expert support and coaching, in order to become for the first time pilot laboratory for the implementation of an interlaboratory comparison (ILC) for participants from accredited calibration laboratories or inspection bodies active in the legal metrology area. Two NMIs from the WB6 region - the Directorate for Metrology of Albania (DPM) and the Kosovo Metrology Agency (KMA) - were committed to implement a very first ILC independently. Despite the fact that only 2 out of 4 countries made use of this opportunity, the project can be considered being successful in its scope of application. The two concerned NMIs have acquired the knowledge to implement ILCs in line with the requirements of ISO 17043:2010 and are able to transfer and apply this knowledge to the implementation of future ILCs in other measurement areas. DPM is planning to integrate ISO 17043 into the institutions integrated Quality Management System and to draft technical protocols for other measurement areas required in the future. As a first step, a bilateral cross-border ILC between the two institutes in the area of pressure measurements is planned with DPM as pilot and KMA as participating laboratory. that requires successful ILC participation for its future accreditation.

More information on this project can be found in the final report under https://see.ptb.de/see-qi-projects/iso-17043-capacity-building/ 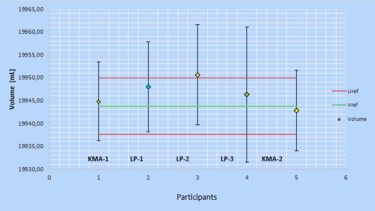